A new study, published in this week’s Pediatric Journal, of Day Cares and education centers has revealed that Preschoolers aren’t getting enough physical activity in their day. That’s a bad precedent being set for sedentary lifestyles in the future when according to the CDC approximately 17% (or 12.5 million) of children and adolescents aged 2—19 years are obese.

According to the study’s author, Dr. Kristen Copeland, the reason for the lack of physical activity is 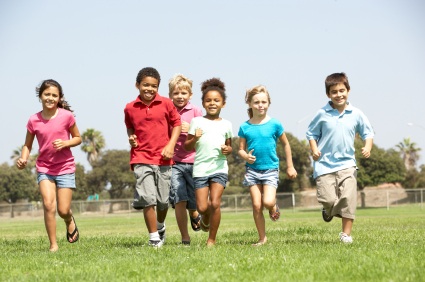 due to the increased emphasis on classroom learning. With over three quarters of American children ages 3 to 5 in child care leading pediatricians like Dr. Copeland say that they need to be more physically active. "Daily physical activity is essential for preschool age children both for preventing obesity and for their development – their physical development and their cognitive development," says Dr. Copeland in an interview with CNN.com.

When kids are running, skipping and learning to ride tricycles, they aren’t only exercising their bodies, they’re also exercising their minds, which is why playtime is so important, experts say.

One solution to combat this new trend is to increase the amount of physical activity in the daily schedule of children at child care centers. Pediatric experts recommend that preschoolers get 90 to 120 minutes of gross motor activity daily, and be taken outdoors twice a day. But Copeland found that children spent only 2 to 3% of their time engrossed in vigorous play during an 8 hour day in child care. So increased playtime outside is a must.

Enrolling children in physical activities, such as martial arts training, also increases cognitive skills, builds character, and helps with social awareness skills. Copeland and her team at Cincinnati Children’s Hospital learned that some parents with kids in day care centers were even requesting that their children stay indoors because of fears that their children might be injured due to faulty playground equipment or lack of supervision. Training in martial arts centers, like Sidekicks Family Martial Arts Centers in Lithia, FL alleviates many those concerns because equipment is always state of the art and students are under constant supervision of certified, black belt instructors.

When children get to school age, the potential for sedentary lives continues in child care facilities as well as for children that go straight home after school. In the state of Florida, emphasis on standardized testing is cutting into daily play at school and at home in an effort to help kids pass their exams and help the school achieve a higher school grade. In some, more academically rigorous settings, students have the option of opting out of physical education and/or recess completely if they seek an alternative physical activity outside of class (such as martial arts, gymnastics, cheerleading, or dance).